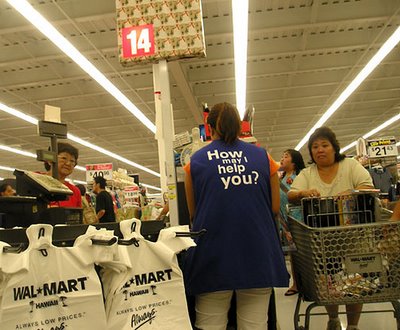 Small retailers are up in arms over this trend. It is clear that they face a very real danger of being driven out of business. This sort of thing has happened elsewhere before. In the US, megastores -- most notably Walmart -- have devastated downtown shopping districts all across America's heartland.

One thing I find disturbing in the case of Thailand is the portrayal of the struggle as one between Thai mom-and-pop stores and powerful foreign corporations.

I don't know whether the xenophobia card is being used deliberately. Perhaps it is deemed necessary to win Thai consumers over, since they seem to prefer the low prices, pleasant atmosphere, efficiency and courteous service of the megastores.

But appealing to anti-foreigner sentiment can be dangerous. I would hate to see foreign investment dry up and Thailand plunged into another dark age. We have come too far for that.

What the small retailers should do is study what happened in the West. They should look at the successful strategies that small businesses there used to avoid being swamped by the megastores. They should adapt and form collective strategies to keep the giant stores at bay. But they should stop muddying the issue by blaming foreigners. The real issue is one of scale, not nationality.

If they don't know where to start, here's an article that might help point them in the right direction.