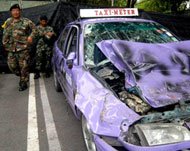 Say of him what you will, no Thai prime minister had ever dispensed as much government largesse towards the rural poor as the deposed Thaksin Shinawatra. To much of Thailand's long-suffering poor, he was a hero. There are probably those who would be literally willing to lay down their lives for him, as a recent incident suggests. A Thai taxi driver rammed his cab at full speed into one of the tanks that were out in force during the coup. Thaksin inspired so much love and hate that if he were to return to Thailand, we might well see the sort of violence that followed the return of Gen. Thanom Kittikachorn to Thailand in 1976.