The Coup Chronicles (3): A Small Death for Democracy 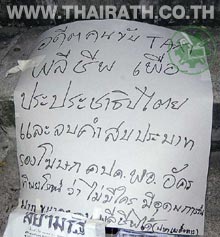 His name was Nuamthong Praiwan, and he had the heart of a fighter.

When Thailand's democratically elected but allegedly corruption-ridden government was overthrown in a coup, the 60-year-old cab driver protested by ramming his taxi into a tank, badly injuring himself in the process (see earlier blog entry).

On Halloween night, he jumped off a pedestrian overpass with a rope around his neck, the other end of the rope tied to the railing.

He left a suicide message which read "Former taxi driver sacrifices his life for democracy and to erase the putdown by deputy CDR spokesman Col. Akra Tipayaroj that no one has such idealism that he would willingly give his life." Col. Akra had voiced the opinion in reaction to the news of Mr. Nuamthong's earlier act, which was apparently seen as a stunt.

Some people may regard him as a crackpot, a stupid pro-Thaksin fool, but I think his heart was in the right place. That makes him a hero in my book.